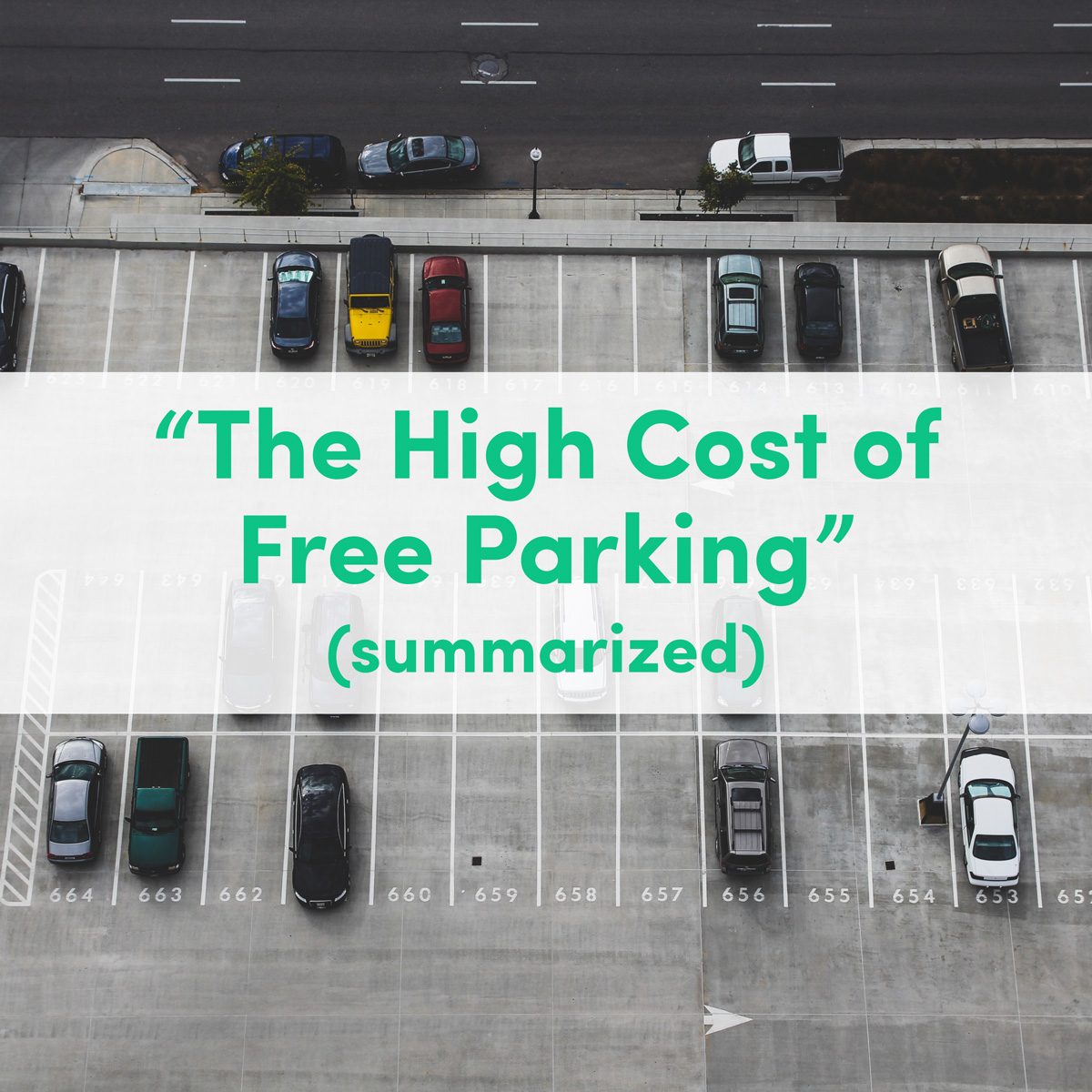 Parkade was born out a belief that the way parking is used in the United States leaves a lot of room for improvement, and we want make it a lot easier for buildings to do a better job of better utilizing their parking.

There's much more to the story, literally, and the story was written by UCLA Professor Donald Shoup. His groundbreaking work, The High Cost of Free Parking, finally shined a spotlight on how parking works in America, and why it's so vital to fix it. In his parking treatise, he explains the rise of "minimum parking requirements" — the pesky laws most cities have on the books that require specific amounts of parking in pretty much every type of new construction (or even existing buildings, when the building's use changes).

He also dives into the problems with such laws, and why it's so problematic that the costs of parking are paid indirectly by all members of society, rather than by people who are driving and parking. His work even inspired an entire Vox documentary:

At 800 pages though, it's a long read. And while we highly recommend it everyone, to help educate the public on parking and how much better it could work, our founder Evan Goldin has summarized the book and, with Professor's Shoup permission, published a summary of the most vital parts of his magnum opus.

Shoup’s treatise carves the arc of parking policy in the United States and abroad.

To form the context of the storyline, Shoup lays out the evolution of the two places people park: On-street and off-street. As cars started becoming popular in the early part of the 20th century, the most desirable part of cities quickly became filled with cars, and not enough parking spaces. A few different approaches were tried to solve this problem — parking meters and off-street parking minimums. While parking meters have become popular in the densest part of in America’s biggest towns and cities, parking minimums became much, much more prevalent, affecting nearly all new developments nationwide.

Parking minimums were cities’ way to ensure that there were enough parking spaces for people to park in. That solved one problem, as Shoup said, but created many, many others. Namely, parking minimums have literally flooded the world with far too much parking.

Urban planners try to make them appear scientific (4 parking spots per 1000 feet of commercial space, 1.5 per dentist chair), just as bloodletting proponents made bloodletting appear to be a highly precise science (Shoup’s book is filled with wonderful metaphors — see below). And the minimums increased vastly over time, as most minimums try to ensure that there’s enough parking to satisfy peak demand for parking — for free parking, that is.

Americans, rather than trying to manage a common good with prices, have tried to legislate a vast abundance of parking without much thought for the consequences. And the consequences, as Shoup goes on to point out, are dire.

Minimums have produced poorly-designed cities, where more land is often devoted to parking than the primary purpose(s) of the buildings on the site.

Off-street parking requirements reduce density because each building has its own, unshared parking that is often unavailable to the general public.

Minimums destroyed the market for parking

Minimums have eviscerated the ability for most places to install parking meters, because meters can’t compete with free parking.

Parking minimums have, perhaps most importantly, broken the link between using parking and paying for parking. 99 percent of all parking in America is free, so most people (87 percent) drive on every trip they take. Meanwhile, prices of all goods (especially housing) have gone up to indirectly cover the cost of providing those parking spots, and those cost are almost always paid by cyclists and pedestrians at the same rate, even though they don’t consume parking (with very rare exceptions).

Of course, as Shoup points out, it isn’t that everyone wants to drive. Parking requirements have helped to create the illusion that, all things considered, almost everyone prefers to drive everywhere alone, but everyone actually prefers the best value, and parking requirements keep the cost of driving so low that solo driving is the cheapest form of travel. If all drivers had to pay for their own parking, fewer people would “prefer” to drive everywhere.

Everyone generally preferring to drive, as a result of parking minimums, the world has become much more congested and polluted because everyone’s driving to their destination. And when they get there, rather than finding open spots because the market is setting the price of parking, free parking ensures nearly all parking is consumed, so drivers spend far too much time cruising for their spot.

A framework for change

After breaking down the state of the world and what’s led us there, Shoup spends most of the second half of his book laying out a framework to change the status quo.

Rather than free parking serving a community poorly, Shoup encourages market-rate pricing. But citizens generally don’t want to pay more for parking — because the money feels like it just disappears and doesn’t benefit the person playing. To solve this problem, Shoup suggests communities charge for parking as part of a “Parking benefit district,” where some or all of the money fed into the meters would go directly to the community where the meter resides. Doing this would create a way for locals to charge outsiders (and locals) for parking, harnessing the ownership so many people already feel over their home or business’ curb to actually turn them into the beneficiaries. Parking benefit districts will create the necessary political support to charge market prices for curb parking.

Shoup also points out that ability to pay is just one of many factors (number of car occupants, value of time savings, parking duration, etc) that goes into a driver’s choice of where to park. To summarize,

"Directly charging drivers for their parking is much fairer than forcing everyone to pay for it indirectly."

When it comes to parking policy, Shoup reminds us that America has become a strange place. In the country that proved capitalism the winning governance model, we let planners tell us exactly how much parking is needed at every type of residence or business, and take it as gospel. To counter, say, parking minimums for restaurants for example, Shoup suggest planners treat parking at restaurants just like the restaurants itself: Let the market decide how much parking to provide, just as the market decides how many restaurants to provide.

Shoup adds a few other ways to move toward smarter parking policies. Unbundling parking from rent/condo deeds, deciding parking and building approvals separately, and — if minimums are still present — having minimums that focus on car-parked hours rather than the raw number of spots (to encourage better usage) would help tremendously.

His epic treatise shows the ills of today’s system and guides us toward smarter policies to fix the status quo. It won’t be an easy fight, and he knows that. But until we do, if motorists don’t pay for parking, society at large must pay for it in other ways — traffic congestion, energy consumption, degraded design, urban sprawl, and the high opportunity costs for land.

A framework for change

One of the highlights of Shoup's writing is his ability to expertly craft analogies that really make you think. Here are the top analogies you'll find The High Cost of Free Parking:

Suppose cities financed roads the same way they finance parking. Cities could require new buildings to pay for adding enough road capacity to handle all the additional vehicle trips generated. Each new building would pay for street widening and intersection flaring, for example, to meet the added demand for driving, so that traffic congestion would not increase. Like the cost of parking, the cost of roads would be shifted from drivers into higher prices for everything except driving. Would this be a good idea? No, because everyone but drivers would pay for roads.

To gain a new perspective, imagine what would happen if urban planners arranged to have the charges reversed for all telephone calls, so the called parties, not the callers, pay for telephone calls. Let’s further imagine that the cost of all the reversed charges are bundled into every property’s mortgage or rent payment, without separate itemization, so that nobody seems to pay for using the phone. Because all the calls are free to the callers, the demand for telephone use soars. To avoid chronic busy signals, cities set minimum telephone requirements so that each new building provides at least enough telephone lines to handle the peak number of calls. Soon everyone expects every building to have at least one telephone line for each occupant plus addition lines for fax machines, computer models and burglar alarms. Developers pass the cost of providing this telephone capacity on to the occupants, raising the price of all goods and services, including housing.

Free curb parking is like rent control for cars. High demand for a limited supply of free curb spaces predictably leads to shortages, and to deal with this problem cities impose off-street parking requirements that increase the cost of housing. Free parking for cars thus raises the cost of housing for people.

Gasoline is a basic necessity for cars, but this does not mean gasoline should be free. Filling stations offer different grades of gasoline (with both self service and full service) at different prices, and this is not unfair. Parking spaces differ from one another chiefly in location, and different prices in different locations are likewise not unfair.

If cities required restaurants to offer a free dessert with each dinner, the price of every dinner would soon increase to include the cost of a dessert.

To ensure that restaurants didn’t skimp on the size of the required desserts, cities would have to set precise “minimum calorie requirements.” Some diners would pay for deserts they didn’t eat, and others would eat sugary desserts they wouldn’t have ordered had they paid for them separately. The consequences would undoubtedly include an epidemic of obesity, diabetes and heart disease. A few food-conscious cities like New York and San Francisco might prohibit free desserts, but most cities would continue to require them.

Many people would get angry at even the thought of paying for desserts they had eaten free for so long.

Off-street parking requirements eliminate any incentive to charge for parking in proportion to a car’s size. When cars grow larger, cities typically respond by increasing the minimum width and length of the required parking spaces so that drivers can safely and comfortably open the doors of their bigger cars without marring the finish of adjacent vehicles in parking lots. Imagine the public health problems if people always given, free, an entire new wardrobe of larger clothes whenever they gained weight.

The High Cost of Free Parking was published in 2005, so some of its stats are a bit dated. However, knowing they may need a refresh, you'll still find some incredibly useful statistics.

Want to read the High Cost of Free Parking, but in tiny, bite-size nuggets? Or, you read the book but just want a refresh?

We've pulled out the key points for you to review.

More from the Blog 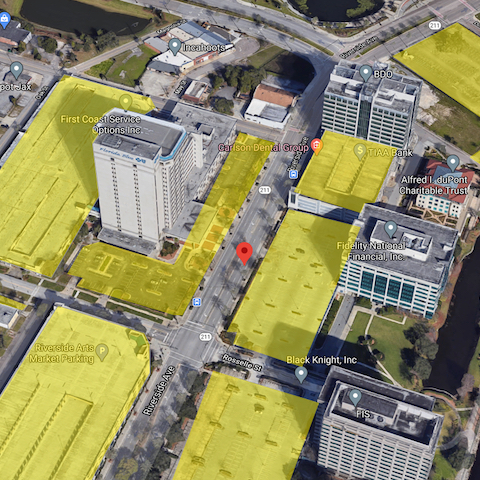 How in the world do easier parking and reduced emissions go together? We'll explain, and share our vision for the greener world we want to create — through smarter parking. 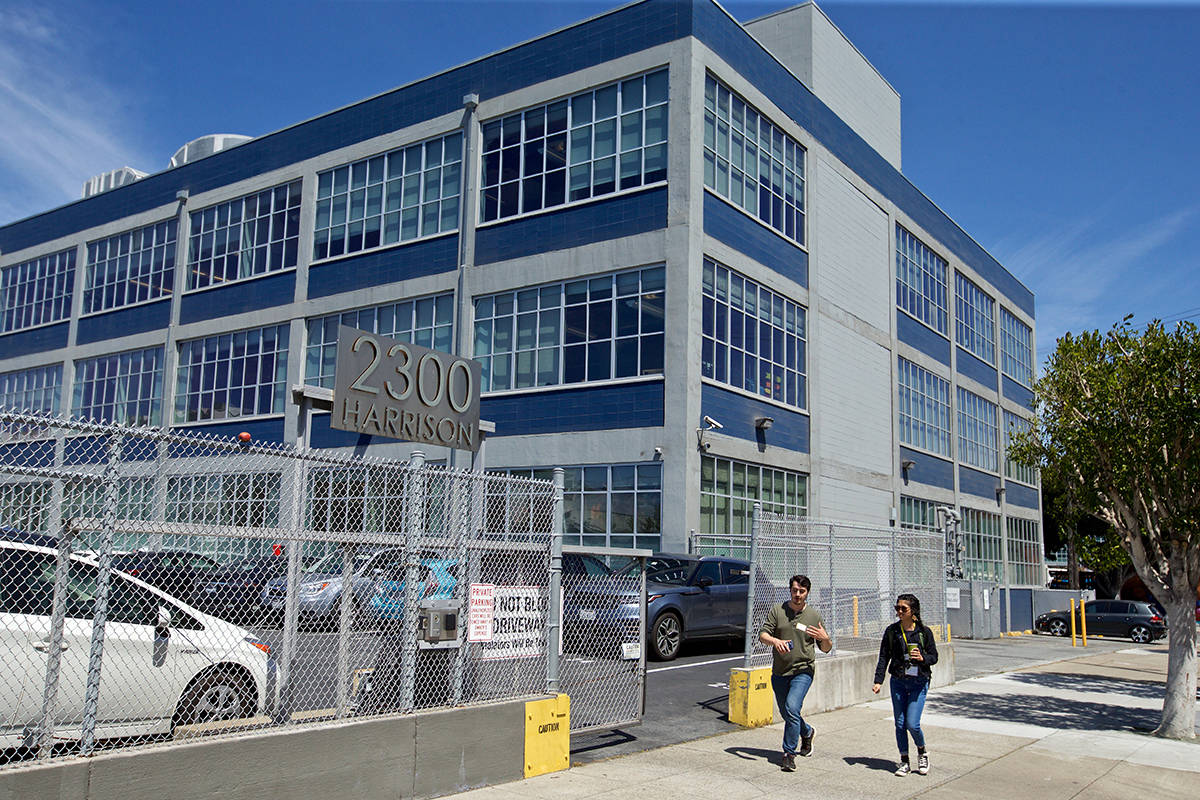 How Parkade's CEO helped to change commuting culture at Lyft

Tired of parking frustrations at his then-office, Parkade CEO Evan Goldin (then a product manager at Lyft) moved the company from free, first-come first-served parking to paid, reservable parking. Here's how he did it.

How does a company switch to paid parking, but do it equitably?

Ready to switch to paid parking at your company? Here’s how to make a smooth transition.

Want to reach us?

Get in touchOr, have us call you